The first Standard (made in 1946) was made for the County of York City but did not represent the current County of North Yorkshire South. It was therefore decided to hold a competition for a new one  The winning design depicted all the 5 Divisions, using local historic sites: St Mary’s ABBEY Selby; Hazelwood CASTLE, Royal Coat of Arms from King’s MANOR; Healaugh PRIORY remains; Clifford’s TOWER.

The Standard was made by Mother Abbess Mary Bernard of St Joseph’s (Poor Clares) Convent, York, who is a member of the Trefoil Guild. Work commenced in June 1991 and was completed in October 1992, just in time for it dedication on 11th October 1992 in York Minster, when the whole County paraded through York and joined in the service. 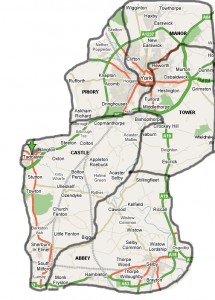